Anything About Inspirational Cape Cod House, Take a Look !

Do you ever dream of having a cape cod house? Have you already own one? Well, in this section, we’ll talk about the whole thing and ideas of cape cod house. A cape cod house is one of the types of Colonial Revival style house.

This style of house was very popular in the era of 1920 to 1960. A cape cod house is one of the simplest types of New England home which is in a small version. Almost in every neighborhood, you will see this house design.

People love this cape cod style of the house because of its small size and economy. This kind of house is relatively affordable compared to the modern house design. It’s because the larger Colonial revival was so expensive back then. Young couples or first-time buyers would love to buy something more affordable like cape cod house.

Historically, this house was developed in America in the early 18th century. It’s still popular until modern era nowadays. There are some reasons why people love to have one, those will be revealed later along with some stunning ideas of cape cod house.

Many tiny cottages use Cape Cod as the highlight. Tourists love to use this house just in certain season. Summer is the best season for staying at a cape cod house. But, the one you see in the picture is a cape cod for full-time living.

There’s not enough when talking about a cape cod cottages without its history. So historically, this tiny cottage was built in the 50s, without knowing its origin. This is just the look of its outdoor, it looks so rustic and old. You’ll be surprised when you enter the house.

The interior looks so clean and modern, apart from the rustic outdoor. From the inside, there’s no such thing as a rustic element. The clean white walls and ceiling make this one-room home, to be the house to live in.

It’s completed with some armchairs which are located around the woodstove, a bed to sleep on, and a small dining table set in the corner. Some element that surprises me is the kitchen. The kitchen this one-room house is big and well-equipped.

The kitchen has a bunch of storages to fulfill your needs of belongings. There are two larger closets where you can put in your dryer and washer. It’s just a complete house in a single room. The location of this cape cod house is near a beach, owning this cottage is like owning the beach view. 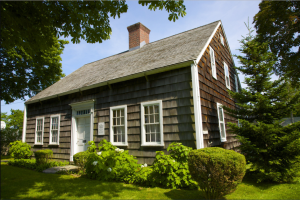 If we talk about cape cod house historically, It’s not just about a simple and pure revival story, but also a survival story. In East-Coast Colonial era, this kind of house was heated by one fireplace with a rising chimney right from the house’s center.

The cape cod house shown in the picture is the one from Lond Island which was built in 1750. It’s got a simple design, expandable and also compact. For the developers in middle 20th century, a cape cod house can be prefabricated.

Adding dormers is one of the ways to create a difference between today’s cape cod house style and the pure colonial home. Unlike today’s colonial house which will have one centered dormer on the roof, the original cod cape house style tends to have two or more dormers.

There are a lot of shapes and sizes when dealing with dormers. You have to consider the optimal placement and appropriate size for the dormers to create a great architect for your cape cod house. The dormers of your choice could be ended up looking too large or too small.

To create a perfect dormer, you may need a help from architects. They can decide and help you decide the symmetry and proportion of the dormers. As you can see, the picture shows some dormers that match with the first floor’s windows. They are all equally spaced.

This cape cod house is in Cameron design. It’s adapting the open concept house plan which is systemized by professional. You can call it the floor plans of Cameron Cape Cod. This house design would be friendly in any neighborhood.

On the first floor of this cape cod house, there are office, toilet, utility room, and one large room which contain a kitchen, dining room, and living room. All of them in one large room. So, when the guests get into the house, they will see them all from one point of view directly from the entry. 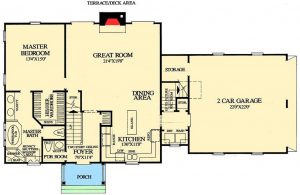 Another example of the open floor plan of cape cod house is this one-floor concept. There is a garage room which is large enough to fill with 2 cars. This floor plan is quite complete for a one-floor house. In the great room, you have dining area and kitchen too.

For enjoying the view of the outdoor, you can get into the porch, foyer, and terrace or deck area. All of them are attached to this house plan. A complete and large master bathroom would be perfect to fulfill your experience in your master bedroom.

This cape cod floor plan looks so simple, but I guess it requires a pretty large space. You have to make sure that all of the function room is there to complete the house to be a full-living house. 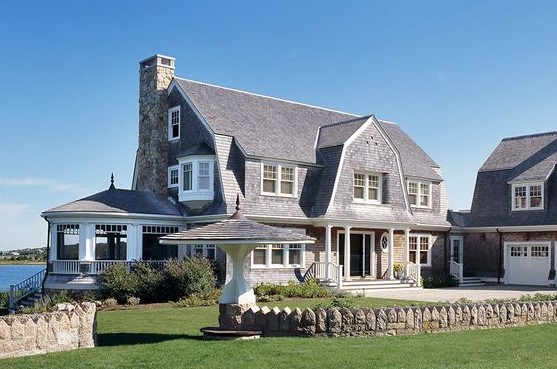 There’s a lot of reason why people love a cape cod house. They may love something more traditional and classical. It represents the classic, old-school Americana. Nowadays, this type of house is the most quintessentially American of styles of architecture.

The house offers you with coziness, warmth, and nostalgia. If you want to have this house style in seeking of home’s sense, this popular classic house is the best choice you could ever have. Having a cape cod house needs some consideration including the cape cod house plans.

The other reason why people love to have cape cod house is that this house sits low to the ground which gets it hunkering down against the winds. It’s also providing a safe, warm harbor. We agree that having other country house would waste money on the heating bills.

A cape cod house is a pretty good solution to avoid that because you can just sit back and relax, you already get the warm feeling you need. The size of cape cod house is very manageable. There will be no space wasted inside the house.

The other kinds of country classic house style tend to be looking too old in this era, but cape cod house seems to age gracefully without being outdated. So, you can say that this house style is timeless. In fact, this house style is still popular since it first emerged centuries ago in America.

This cool style has endured so many periods of developmental. It’s quite flexible, but it’s gonna be looking perfect and comfortable near the beach. You can also find it in a suburb or small town. It’s okay to having cape cod house sitting alone on a country hill.

This cape cod style house looks so handsome. The wood-shingle and facade that is made of granite stones. This large house stands on its one in the middle of a grass field. This is one is so expensive if you consider to buy it.

This cape cod-style compound can be found on Martha’s Vineyard. In the current marketplace, this building is the priciest. This house was built in the year of 2001 by Don Brandenberger which is an architect from California.

It stands on the 29 acres of verdant land which is located 1.5 miles away from South Beach. From Edgartown, this house is about three miles away. The granite stone and wood shingles are combined together to create an elegant impression you’ll see first.

From the upstairs, you will see a panoramic view of the sea right from the master bedroom’s walkout deck. In the backyard, there’s a terrace next to the pool. All of them seems to be looking so rustic and country living.

Take a look at this inspirational classic cape cod house. It’s designed by the home planner expert who knows what he does. This house’s got a porch on the front of the house. It does emphasize the classical touch of the house.

The country style is perfectly suited this cape cod house but it doesn’t mean it can’t be flexible to another style of the house. It’s actually highly adaptable. This house style can handle any style of decoration. you can apply the decoration style you like to be in the mix.

One of the key elements of having the architecture of cape cod style is the large chimney in the center which is placed right behind the front door. A Cape Cod style should also have a steep roof that will quickly shed rain and snow.

One of the most recognizable elements you need to have in classic cape cod style house is the shingle siding. Nowadays, people build the cape cod with brick, stone, and stucco.

When you are done with the classic design, you may wanna turn yourself into something more modern. There’s more variation in modern cape cod house. You can do almost anything to the house without even consider the classic style.

It’s more like bringing the old house standing tall in modernity. Having a classic outdoor of cape cod wouldn’t have to bring it to the interior. In the inside, you can design it to be full of modernist details.

After the Weidlinger left, this house belonged to the McMahon, then he renovated it to be classical modernist. People love having cape cod house because of the artistic vibe that is still alive. The lure for artists in Cape Cod is so powerful, it never disappoints architects.

Finally, when you decide to have a cape cod style house, you may need to know about the characteristic, so you know what you are gonna do to get the right style and appearance. Usually, the size of cape cod is fairly small and it’s also symmetrical.

The mass of the house is rectangular which contain 1 to 2 and a half stories. The side-gabled roof has narrow leaves and medium pitch. Dormers tend to be the highlight of the roof. The entrance is placed in the center completed with the paneled door.

The most common thing you’ll find in cape cod house is the word clapboard and shingle siding. Make sure all the characteristic of cape cod is installed in the house, if it’s not, the style wouldn’t be complete.

All of the ideas above, hopefully, it would bring you to decide the best one for you to live in. Cape Cod can be a

10 Under Stair Storage Ideas that Make Your House…